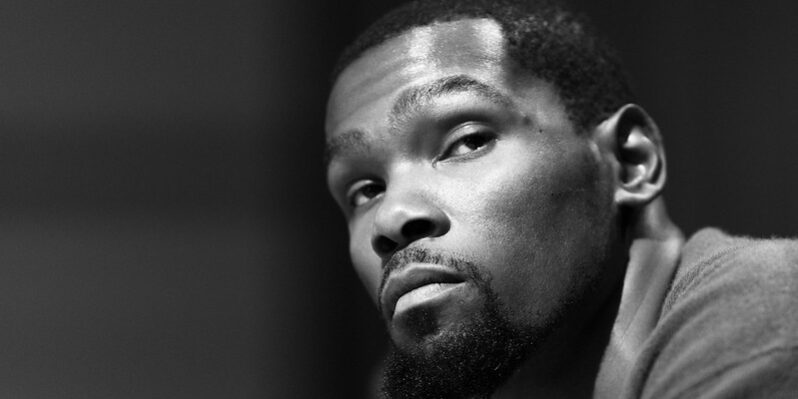 On November 12, 2018, in Los Angeles, Durant cut into Green after Draymond failed to pass him the ball on a bungled end-of-regulation play. He challenged Draymond’s pride, which prompted Green to go nuclear. Draymond would call KD a “bitch” multiple times and assail him for dangling his impending free agency over everyone else. In the aftermath, attempts at reconciliation were made. The two continued to work together. But the incident served as a kind of demarcation point. Perhaps the Warriors season was already there, just not so publicly. The event, though, darkened it. It was an incident Kerr expressed concerns about at the time, using the following metaphor when asked about the incident: “Sometimes, team chemistry is like a balloon. You worry about if there’s a point where it pops.” The argument made news, locally and nationally. In the story of a dynasty, there are only two modes: rise and fall.

The game after KD and Draymond’s famous November feud, I asked Andre Iguodala about it. “Shaq and Kobe ain’t like each other,” he said matter-of-factly. I responded, “But that ended in a way you wouldn’t want this to end, right?” Andre replied, “They won three championships in a row. Ain’t that what you want to happen?” “I guess all things come to an end,” I said. Andre nodded and put a bow on the brief conversation: “Everything come to an end.”

What followed was a dragging kind of regular season, one in which the Warriors managed to get a one seed, absent much apparent esprit de corps. Such was their advantage over the league that this qualified as underperforming. More than the basketball, it was just the overall vibe that brought down onlookers. Just as KD’s better moods can be contagious, his worse ones can be the bad kind of infectious. This was a regular season in which Kevin Durant was halfway out the door and in no way loving that status.

In January 2019, I wrote about how the Warriors worked hard to make Kevin Durant happy, in terms of offensive approach. A mutual friend told me that Kevin was livid over the article, so I braced for conflict. Some stars can get mad over a headline. I’d been on the receiving end of that. A couple sentences into the dressing down and you realize it’s all based on a tweet. You ask if they read the article and receive a, “I don’t HAVE to read the fucking article to . . . ” And so forth.

Not KD. He reads everything and takes issue with specific sentences and phrases. A few in particular had inspired his ire, or so I heard. So I entered the Golden 1 Center in Sacramento with certain expectations.

I figured I might get a muttered, “Hater in the house,” a phrase KD favors with the disfavored. In any event, I was primed for an interesting exchange. We, the huddled media, received our permission to enter the arena court and trudged on in. It’s common at a shootaround to walk onto the floor, in the out-of-bounds area. The moment my feet touched hardwood, a practicing Kevin Durant ditched his shooting drill, and speed-walked in my direction.

The ball KD abandoned was still bouncing when he spat, “How can you write that shit!?” He was off and running, venting about the article as media members gawked on. I went into the auto pilot mode I’ve developed over the years. You can never argue your way out of these, or at least I never had any luck with it. The star will never say, “Gee, that’s a good point you made,” or, “Ohhhh, I now see that’s a metaphor.” So I tend to drone, “What’s your perspective?” and wait it out, in case some of that perspective comes through and I learn something. Maybe they’ll express a truth I need to grasp. Maybe they’ll experience catharsis. I just know this tends to be a one-way street. KD inveighed that I didn’t know what I was talking about, and that I didn’t know him. Finally, he closed as his voice rose, with a slight tremble. “You don’t know me! You don’t know what makes me happy!”

The media peanut gallery heard that last line. It was too loud and too strange to forget. Among colleagues, the catchphrase would follow me the rest of the season. Anytime I offered an idea on where to get something to eat before the game I was liable to get, “You don’t know what makes me happy!” in response.

Later that same day, I showed up to pregame locker room availability. The Old Media Code dictates that, if you’ve pissed someone off, you have to be available. I suppose it’s about accountability and honor, such as we have any in this business. So there I was, available, staring at the TV of an empty locker room. ESPN’s Nick Friedell, just before leaving the locker room, mentioned that KD was glaring at me from the training table behind the locker room. Great.

KD made his way from the training table to his locker. He motioned me over with a hurried gesture. Maybe, in retrospect, this interaction could have gone better. I sometimes wonder if what is sought in these matters is mere apologetics. That if I only cave and grovel, we actually get somewhere approximating peace. That certainly isn’t the Old Media Code, but it is likely the most expedient process.

I started with that. “Look, I appreciate you being direct with me . . . ” But the olive branch was instantly swatted aside, interrupted by more venting. He was big on how I had not included comments from his postgame press conference. He kept repeating this. It confused me, because he was talking fast without context. He assumed I knew everything he’d said in that press conference, including whatever detail he believed pertinent to the article.

His perspective on the matter wasn’t wholly insane. If my job is to follow him around and tell stories about what he says, then I must have archival knowledge of everything he says publicly. It doesn’t quite work that way, though, at least not for me. Typically, I’ll attend the coach press conference, before the locker room is open. The player press conferences that follow happen concurrent with locker room availability. I generally prefer the locker room to the pressers because there’s actually a chance I might get information nobody else has. Also, there’s just a better shot at seeing something hilarious or having a memorable conversation. Press conferences are usually a bore.

I started responding. “Look, I think . . . ” But KD interrupted me, and just in the way I’m used to. He swiveled his head around the locker room. “Not so loud, bro,” he said. “Everybody don’t need to be hearing this.” Confused, I whipped my head around, seeing nary a threat. Quinn Cook, an affable friend of Kevin’s, was next to us, but the Kings’ impressively capacious locker room was otherwise empty. Why was KD worried about our conversation getting overheard by teammates when he wasn’t even establishing that this was off record? What was the big problem here?

I tried to make a few points, saying I didn’t begrudge him for having leverage with his contract, and insisted that I had good reason to write what I wrote. KD wasn’t impressed and accused me of trying to “rile up Steph’s fans.” He expressed that this was a constant theme in the Bay. All of us local guys just wanted to kiss Steph’s ass at his expense. This was KD’s consistent lament. He would frequently squabble in direct-message conversations with the Warriors fans of Twitter, frequently accusing them of favoring Steph at his expense. In one such exchange that foreshadowed things to come, he was asked by the WarriorsWorld account whether two-time MVP Steph Curry or Kyrie Irving was the better player. “I gotta really sit down and analyze it,” Durant demurred.

I ended up telling KD that, if this kind of thing made him mad, I could actually come to him next time and get his perspective on it before running with something. A reasonable request maybe, but for the athlete, it just promises more interactions with the person they currently despise. KD curtly told me, “Just do your fucking job,” and walked off. I looked and shrugged at Cook, who laughed uncomfortably.

Well, it was time to do my job, whatever that is. What it sometimes is, is bullshitting around a basketball court as players warm up. Pregame offers the opportunity to walk about the court and schmooze about the NBA cafeteria scene. I shook hands with Warriors broadcaster Jim Barnett and talked about the advance scouting profession for a spell. I joked around with Warriors assistant coaches. Afterward, Friedell told me that KD was glaring at me through his whole warmup routine. I didn’t know what made him happy, but I was getting a sense of what could make him obsessively pissed.

Guys had gotten mad at me before, but not like this. They’d shown anger, but betrayed no obsession. Generally, you get a blast of scorn, but the underlying idea is that you’re a pissant who, after the initial transgression, isn’t worth a further thought. KD made you feel as though he thought more about you than the other way around. He almost flattered you with his spite. Or, it would be flattering if the spite wasn’t so KD-focused. You were only hated insofar as how you reflected on him.